Proceeds go to support low-income families affected by the wildfires

Father John Misty has revealed details of a concert to benefit those affected by the recent California wildfires.

The December 18 show at the Ace Hotel’s ‘The Theatre’ in LA has a line up including Haim, Mac DeMarco, Weezer’s Rivers Cuomo, Jonathan Wilson, Weyes Blood, Fun’s Nate Ruess, and Misty himself.

Take a look at the full line up below: 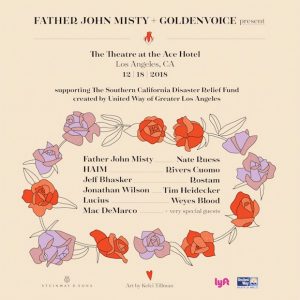 Other musicians have taken action to help those affected by the disaster.

In November, Metallica donated $100,000 to support the aid effort, writing from the band’s All My Hands Foundation page on Facebook: “We would like to encourage you to join us in supporting those in need and our first responders in any way you can by donating money, non-perishable food, clothing and other supplies or by giving your time volunteering or providing temporary housing. Every little bit helps.”

Stars including Dave Grohl and Lady Gaga also helped in the relief effort by providing food and supplies for both people affected by the blaze and the fire crews that worked tirelessly to control the fires.

A number of celebrities lost their homes in the wildfires including Miley Cyrus and Gerard Butler.

Tame Impala’s Kevin Parker had to evacuate the home studio he was recording in.

Proceeds from the event will go to the Southern California Disaster Relief Fund, which supports low-income families who were impacted by the wildfires.